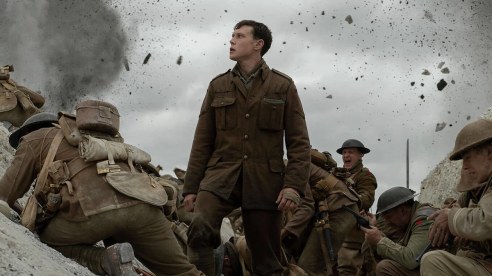 What recent film reminded me of Psycho, Gravity, Million Dollar Baby, Birdman, Rope, The Revenant, True Grit, All Quiet on the Western Front, Paths of Glory, The Searchers, Deuteronomy 20:19-21, and Psalm 1:3 (the last two being Bible references)? Why, that would be 1917, of course! (Details at the addendum below).

1917 is the recently released World War I film that is snatching up the Best Picture awards from a surprising number of groups, starting with the Golden Globes, and is now, with the PGA award, the surprising frontrunner in a year of very good films. If you know anything about it at all, it’s that it is created to appear as one long take. It’s an achievement, but it’s also an experience, and more touching than some critics are giving it credit for.

The technological wonder of it all is legitimate artistically, to a point; the plot involves getting from point A to point B alive, and the one-take approach gives us an unbroken experience with our leads. It can be distracting for some, but my experience with it was a combination of connection to the plot, identification with the main players, and a joy of experiencing a dazzling technical display. Knowing that it was the work of legendary Roger Deakins (who will surely win his second Oscar for this) was part of my enjoyment.

Critics are correct in that the plot is thin. But so what? That’s a topic worthy of much discussion, and as an American, I am supposed to be guilty of putting too much emphasis on plot. A simple plot is neither a good or bad thing in itself; here the simplicity helps keep focus, and the main goal stays the main goal. Making it through alive and delivering a message is always kept in the forefront, and with that always in place, we can continually connect with both the actor/s and the self-conscious but stunning visual approach.

The screenplay is both surprisingly good and occasionally hokey. With a single-minded focus encapsulated in the simulation of an unbroken shot, emotion might seem to have no place. Not true (spoiler alert, big-time). But with the death of Lance Corporal Blake, we are forced to stop, and we are forced to see what it looks like to see a young man die. It’s also a transformative scene for Lance Corporal Schofield, who inherits the assigned task—and the film–from Blake and must shift into another gear internally (and then must show those changes to the viewer subtly but externally, which he does). There are some genuine moments that will take you out of your seat, and one or two that you don’t see coming. The ending is also traditional but well-done, in that reserved British way. The simple plot also adds a layer when (spoiler alert again), the men are told to make sure that the delivery of their message is witnessed by others.

The hokeyness may be in the eye, mind, and brain of the beholder. But the sequence of the French girl and the baby seems a bit much, and too much of a classic war trope to be fresh. Our lead does seem to escape a good deal more than might be expected. The whole cherry tree scene should have been left on the proverbial cutting room floor (proverbial because this is shot in digital). Lastly, the appearance of a whole group of could-have-been-helpful British officers is strange in timing, to say the least.

Deakins (along with director Sam Mendes) is known for his gorgeous images, and while the film seems to be about camera movement, there are impressive images throughout. Specifically, the “war is hell” cliché is visualized more than once, and while the film never goes Terrance Malick on the viewer, the shots of nature and water are never less than beautiful.

The casting is typical and unusual at the same time. The two leads are relative unknowns, a given for this kind of film where we are supposed to connect with a character, his tasks, and his environment rather than a star. Fortunately, the acting is stellar, and in a year with weaker male lead performances, George MacKay may have been in the running for acting awards (though the script doesn’t allow him the big Oscar-y moments that the Academy loves to nominate). What I found fascinating were the “important” people the soldiers meet along the way, each one a British film or television star. Of course, our first big name is Oscar winner and forever-Mr.-Darcy Colin Firth. Then we get a messed-up Andrew Scott, looking distracted, upset, and less than his handsome self. Then there is Mark Strong, who gives the “extra information” that moves the intensity of the plot up a notch. Somewhere along the line (not to give too much away) we get Oscar nominee and forever-Sherlock-Holmes Benedict Cumberbatch and, finally, Richard Madden, all taking their place as stakes in the ground of the script. It’s an approach that is worthy of further thought and study, as the familiarity of the actor gives us an instant connection, but can risk taking us out of the film entirely.

I agree with critics who wonder if this film will stand the test of time, and even a second viewing. Much will be lost in a second viewing, as we know what happens all along the way. But the enjoyment of the technical triumph may well make it even more rewarding; this is a time-will-tell scenario. But the audience for my viewing was riveted throughout, and was as hushed and engaged as any recent film audience I’ve encountered. This is a film that is as intense as a murder mystery, and that may be the reason some stay away. But the film is structured solidly enough, and has its emotional moments; it will likely become a classic. And once you step back from the main characters and the plot, this is a film with enough comments on war to fuel a myriad of master’s theses.

Last thought: 2019 has been a very good year for film. Just look at the nominees for Best Picture (which hardly constitute all that was good last year). The Irishman, while being slightly denigrated for being too similar to previous Scorsese films—a ridiculous charge in the light of its elegiac approach—will be considered a masterwork in the future. Parasite is already a classic. Marriage Story is taking longer to find its place in film history, but it will be considered a great film in time. And Once Upon a Time…in Hollywood is not only Tarantino’s best, but has already carved out a place for itself among modern great films. 1917 arrived late, and its look makes it something of a standalone. No, it’s not “like” the other films in this paragraph, and shouldn’t be compared (though it will—a downside of awards season). But it will definitely earn its place among the great war films, and its depths (which are there in spite of its attractive superficial technical characteristics) will be plumbed and admired in time.

Psycho: The film kills its main character early, and the film is then carried by another.

Birdman: See Gravity, but the whole film is one long (apparent) tracking shot.

The Searchers: A simple plot is made more complex with some added information (in the Western, the thought that Ethan might not simply rescue Debbie).

Million Dollar Baby: A film that appeared late in the season, apparently from nowhere, and gobbled up all the major awards.

The Revenant: Our 1917 hero goes through some similar tough times in nature, and the Oscar-winning cinematography is often uninterrupted.

True Grit: Because it contains some stunning Deakins imagery.

All Quiet on the Western Front: The great early classic WWI film, featuring an emotional death scene, and because it too was strong and beautiful.

Paths of Glory: Another classic WWI film, with all those reverse tracking shots through the trenches.

Full-time (associate) pastor at a Christian church. Part-time film professor at Rochester Institute of Technology. Husband for 40 years to the lovely and talented Diane. Father to three children and father-in-law to three more amazing people. I preach, teach, counsel, write and plan in my real job. I teach a subject I love at RIT in my "other job," which is a lot of fun most of the time.... I play piano for our local college choir, and sing and play at church occasionally. I also have a film-related website at www.film-prof.com.
View all posts by Mark DuPré →
This entry was posted in Film Reviews, Newer films and tagged 1917, All Quiet on the Western Front, Andrew Scott, Benedict Cumberbatch, Birdman, Colin Firth, Deuteronomy, George MacKay, Gravity, Mark Strong, Marriage Story, Million Dollar Baby, Once Upon a Time ... in Hollywood, Parasite, Paths of Glory, Psalms, Psycho, Richard Madden, Roger Deakins, Rope, Sam Mendes, The Irishman, The Revenant, The Searchers, True Grit. Bookmark the permalink.