Spike Lee’s new film (streaming on Netflix) is simultaneously the most important film of the year so far, yet not necessarily the best one. It’s important because Lee is one of our most important filmmakers, and it’s important because I’m personally (and temporarily) allowing the word “important” to include the idea of resonating with current socio-political meaning. Lee has reached for the stars here, and doesn’t always succeed. But the reach is admirable, and often meaningful and entertaining.

The film concerns four older Black Vietnam vets coming together one more time to travel back and, ostensibly, find the remains of their old friend, Stormin’ Norman (Chadwick Boseman). (And yes, if you’re remembering a certain General Norman Schwarzkopf, it’s clear you’re supposed to, though it’s not always clear what Lee is trying to say there.) The film also concerns the war itself, the western film genre, the heist genre, the coming-of-age genre, fathers and sons, remembrance, greed, revenge, colonialism, drugs, the non-stop nature and long-range effects of war, racism, protests, Joseph Conrad’s Heart of Darkness, 1948’s Treasure of the Sierra Madre, Apocalypse Now, President Trump, conservatives, the role of the French in Vietnam, and even Lee’s own Do the Right Thing, still the definitive Lee film. That’s an awfully wide area to cover—and the list is just for starters—and Lee can be a pretty blunt instrument. The film is something of an incoherent mess at times, but is always, always alive.

Lee has a signature cinematic element in making reference via older footage to historical issues of race, social problems, and politics. This can take some viewers out of the film, but will take other viewers into something newer, higher, and yet deeper. Seeing historical connections and causing us to see that some things have not changed can be addressed in any number of ways; Lee seems to prefer a direct and dialectical approach to making us aware. This is a challenging filmic game to play, but Lee has experience with it, and his very boldness is what can make his connections so easy to identify and take in. He’s not going to be accused of subtlety here, but he makes his points.

Be prepared for a wild journey with the film. It goes down side roads regularly, and the focus changes quite a bit over time, even though the basic storyline of a journey to Vietnam to collect a dead colleague’s remains almost holds things together. But this is several movies in one, and it’s best to be prepared for commentary, secondary issues, and even transcendence (you’ll see).

A couple of disappointments are in the script and in the handling of a key moment (obviously, spoiler alerts to follow). How the treasure is found is almost ridiculous and almost unbelievable, even if Lee is making a comment here on greed and treasure. Also, there are two moments involving landmines. One is handled well, and brings some warmth, tension, and emotion into the film. The other is filmed in a way that resembled the poor timing of an inexperienced filmmaker. A character backs up, and backs up, and backs up. Then he backs up some more, long after you expect something to happen. I thought it would involve a gunshot, and it didn’t, but the whole scene still stretched out far too long before the inevitable occurred.

What also holds the film together is the main four, then five, characters. This is an older man’s film, and the relationships among the four leads is tight, moving, and very engaging; we want to be with these guys who have such a long and rich history, and (spoiler alert), it’s a genuinely sad moment when we lose any of them. All these performances are good. A real discovery is Jonathan Majors (The Last Black Man in San Francisco), who plays the son of one of the group’s members who surprisingly joins his father and becomes that 5th Blood (or does he?). He quickly becomes the heart of the film. He also quickly becomes a star. 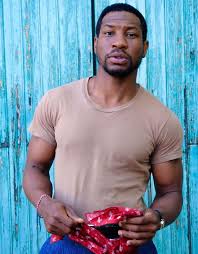 But picture ultimately belongs to Delroy Lindo. I can’t imagine another performance this year that will rival this one for a Best Actor Oscar. Lindo is that actor you can’t name, but when you hear his name and see his picture, you say, “Oh, yeah—that guy!” right away. This film is changing all that.

His role in Da 5 Bloods is Shakespearean, as is his performance. The word “towering” is applicable here. He digs deep and aims high, and completely succeeds. If for nothing else, the film is worth viewing for this performance. To say more would be to give away too much detail, about his character and about where the film ultimately goes. But more than the script, more than the journey we see, Lindo holds this film together, and takes it to heights unimagined in the first part of the film.

Da 5 Bloods ultimately comes across as having too many points to make—all at the same intensity—and feels undercooked. Jettisoning some of these points, or giving more time for these myriad points to settle and blend a bit, might have been a good idea. But Lee is Lee, and there is no one like him. Da 5 Bloods not his best, but the central group of actors, and especially Lindo, will cause it to be long remembered.

Retired (associate) pastor at a Christian church. Retired film professor at Rochester Institute of Technology. Husband for 45+ years to the lovely and talented Diane. Father to three children and father-in-law to three more amazing people. I continue some ministry duties even though retired from the pastoral position. Right now I'm co-writing a book, working on a documentary (screenwriter and assistant director), and creating a serious musical drama (I am writing the book and lyrics).
View all posts by Mark DuPré →
This entry was posted in Film Reviews, Newer films and tagged Apocalypse Now, Chadwick Boseman, Da 5 Bloods, Delroy Lindo, Do the Right Thing, General Norman Schwarzkopf, Heart of Darkness, Jonathan Majors, Joseph Conrad, President Trump, Spike Lee, Stormin' Norman, The Last Black Man in San Francisco, Treasure of the Sierra Madre, Vietnam. Bookmark the permalink.